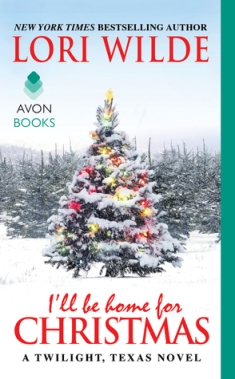 Tittle: I’ll be Home for Christmas

Nothing says Christmas like New York Times bestselling author Lori Wilde and Twilight, TX, and now Lori returns to Twilight for a brand new heartwarming holiday tale. The matchmaking members of the Cookie Club are up to their old tricks again!

Christmas in Twilight, Texas, is all merriment and mistletoe. The Cookie Club is whipping up their most festive sweets, the townspeople are scrambling to get their holiday shopping done, and Joe-a hometown guy with a restless heart-is dreaming about the woman he wants to kiss most…

…And who happens to be staying at his sister’s place over the holidays, while Joe’s sister is away. But Joe isn’t quite sure he wants to be a living Christmas present to runaway law student Gabi Preston.

Joe thinks the sassy sweetheart he nicknames “Trouble” won’t inconvenience anything but his healthy sex drive. But when he discovers the reasons Gabi escaped from her life, he aches to give her everything she’s never had. As the magic of the season draws them together, the gift of love is the only one worth giving…

The chirp of a bird. The whisper of the wind. The gentle sound of her own breathing.

Ah, peace. Nice. Very nice. She could get used to this.

The ping of a metal axe against wood cut the quiet. Gabi lifted her head and glanced around. Less than fifty yards separated her from the Christmas tree farm, and through the branches of the trees she spied a man chopping at a fir that he felled in three easy whacks.

He wore a blue flannel shirt that rippled in the back every time he swung the axe. The sleeves of his shirt were rolled up to the elbows, exposing forearms corded with muscles and giving her a show of strength, agility, and timing as he picked up the downed tree and tossed it effortlessly onto a flatbed trailer parked down the row of trees.

Her gaze dropped to his masculine backside hugged by a pair of faded Levi’s. Uh- oh, she knew that butt. It was the same scrumptious ass she’d seen less than half an hour earlier at the coffee shop.

He pulled a red bandana from his pocket, mopped his face, then turned and caught her staring. Across the distance, his gaze slammed into her harder than a head- on collision. The air shot from her lungs so quickly, she couldn’t even hiccup.

With two ground- munching strides, he reached the barbwire fence, and gracefully climbed it.

Eeps! He was coming over.

Unprepared for a face- to- face with him, Gabi backed up. Fast.

She smacked into the door of the tent. Heart racing, she spun around, fumbled for the key, got the door open, and tumbled inside. The strap of her designer handbag dropped from her shoulder to the floor, and she sagged against the door.

This was crazy. She wanted him. Truly wanted this stranger, but of course she was too unnerved by that realization to have a conversation and figure out where this was going.

Nowhere. It was going nowhere. She wasn’t here for an affair. She was here to get her head screwed on straight, and all he would do was unscrew it.

Maybe. But she wasn’t ready to talk to the likes of him. He was just too damn hot.

Outside, a truck horn tooted. She peeked out the window to see that a red pickup with a trailer hitched to it had driven up to the front gate of the Christmas tree farm. Did everyone around here drive pickup trucks?

He- Man, who was halfway across the road toward her, stopped, shrugged, and went back where he belonged, waving to the man who got out of the red pickup. Whew. Crisis averted.

New York Times and USA Today best-selling author, Lori Wilde has sold seventy-eight works of fiction to four major New York Publishing houses. She holds a bachelor’s degree in nursing from Texas Christian University and a certificate in forensic nursing from Kaplan University. She is a member of the International Association of Forensic Nurses.

Her first NYT bestseller, the third book in her Twilight, Texas series, The First Love Cookie Club has been optioned for a television movie. The town of Granbury, Texas, upon which her fictional town of Twilight, Texas is loosely based, honors Lori with an annual Twilight, Texas weekend each Christmas. http://www.twilighttexas.com

A popular writing instructor, Lori is a two time RITA finalist and has four times been nominated for Romantic Times Reviewer’s Choice Award. She’s won the Colorado Award of Excellence, the Wisconsin Write Touch Award, The Golden Quill, the Lories, and The More than Magic. Her books have been translated into 27 languages and excerpted in Cosmopolitan, Redbook, Complete Woman, and Quick and Simple magazines. She lives in Texas with her husband, Bill, and her two New American Shepherds.