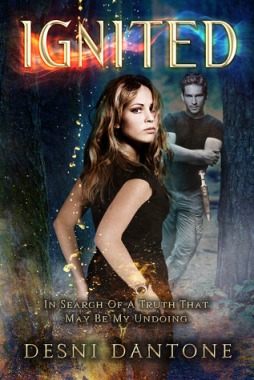 Source: I received a digital copy of this book from YA Bound Book Tours in exchange for an honest review.

Seventeen year old Kris Young is on the run from a throng of superhuman golden-eyed freaks hell-bent on seeing her dead, and she doesn’t know why. Good thing she has her guardian angel to protect her…sort of.

Kris is aided by Nathan, the mysterious man that ends up being anything but angelic when he rescues her for the fourth time in fourteen years. Even if the handsome hero illusion is shattered by his harsh treatment of her, he knows how to fight this strange enemy and is determined to keep her safe at all costs.

As the body count rises in their wake, Nathan introduces Kris to a world in which not everyone is human and the battle lines between good and evil are clearly drawn. Kris’s piece in the puzzle is something neither is aware of and, as they uncover the truth, neither is prepared for what they find. Overcoming twists and revelations that shatter both of their lives, they discover that nothing is as it seems and nothing, least of all their hearts, are safe.

I really wanted to like this book because the blurb really intrigued me but unfortunately I didn’t love it as much I thought I would. But that doesn’t mean I absolutely hated it because it had quite a few interesting aspects and I did enjoy reading this book.

Kris was living a pretty normal life until one day she was suddenly attacked and then she had to flee with a complete stranger. But this stranger was not at all a strange to her, she realises this person is not just someone she sees in her dreams, but is an actual person who saved her life a couple of times when she was in dire need. She is thrown into a completely new world which she didn’t know existed and there are people who are trying to kill her. And when she finally gets to learn the shocking truth about herself, what decesion will she take?

This book was pretty good and I quite enjoyed it but it the plot was nothing new. It was the same- girl learning she’s not living in a world she knows, meeting two gorgeous guys who undoubtedly fall for her and her decision what she wants to do with her life. Frankly, this book was quite predictable. Nonetheless, I liked how the concept of Greek mythology was fused in this book. I also like the concept of Kala and Skotadi, the former being the good and the later evil and how in some cases they didn’t have the power to choose which team they wanted.

Kris was an okay protagonist. She was smart and strong but I couldn’t connect with any the characters much. I just didn’t care. 😦 Nathan was the mysterious guy who had been keeping track of Kris for a really long time and is the knight in shining armour for Kris. But when Kris was clearly, already into the supernatural mess, I don’t know why he took such a long time to explain everything to her. Also I didn’t understand why he didn’t want to act upon his feelings when it was clearly mutual. *sighs* I don’t understand this guy. He was making everything complicated by choice. Alec was a funny guy, I liked his sense of humour. Though I’m still not 100% certain what to feel about him. It’s pretty much clear that there’s a love triangle, although it was not much emphasised in this book. But I certainly loved Callie, Kris’s best friend, she was definitely my favourite character. I loved her loyalty and love for Kris and how she didn’t give up on her when she went missing.

Overall, Ignited was an okay read for me. The plot was predictable and I couldn’t connect with the characters much but nonetheless I enjoyed quite a few aspects of this book. The writing was simple and sometimes witty and it was fast paced throughout the book. I do want to know what happened next but I’m not in a hurry to do so.

Maybe. If you like love triangles, you should give it a try.

So guys, have you read this book? Did you like it or was it just an okay read for you? Did you like the love triangle? Do share your thoughts with me!