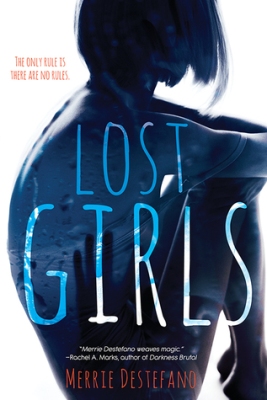 Source: I received an eARC of this book from the publisher via Netgalley in exchange for an honest review.

Yesterday, Rachel went to sleep listening to Taylor Swift, curled up in her grammy’s quilt, worrying about geometry. Today, she woke up in a ditch, bloodied, bruised, and missing a year of her life.

She doesn’t recognize the person she’s become: she’s popular. She wears nothing but black.

Black to cover the blood.

And she can fight.

She’s not the only girl to go missing within the last year…but she’s the only girl to come back. She desperately wants to unravel what happened to her, to try and recover the rest of the Lost Girls.

But the more she discovers, the more her memories return. And as much as her new life scares her, it calls to her. Seductively. The good girl gone bad, sex, drugs, and raves, and something darker…something she still craves—the rush of the fight, the thrill of the win—something she can’t resist, that might still get her killed…

The only rule is: There are no rules.

This book was definitely not what I was expecting but I did enjoy it a lot. At first, I thought it was going to be a mixture of paranormal but it was quite the opposite and I did like that about this book.

Rachel has been missing for two weeks but when she is finally rescued, she realizes she doesn’t remember anything from the past whole year. Her entire attire has changed and now she can even fight. But she doesn’t remember how. When bits and pieces of her memory finally start coming back to her, things get way more complicated. Will she finally uncover the reason behind her memory lapse or will danger swallow her whole?

The plot was really intriguing and the suspense was maintained really well, that’s why I had a pretty hard time keeping this book down. Rachel finds herself in a mess with no memory when she finally gets rescued. When she returns back to school she learns she is one of the most popular girls along with Dylan, her long time crush as her boyfriend. I loved the way things were threaded together.

The characters were well fleshed out. I definitely enjoyed the backstory about Rachel and how things started being different from her. I can’t say exactly what, because that’s obviously gonna spoil everything but the reason was interesting but despite that I felt something was lacking. Nonetheless, I thought Rachel’s new group of friends were going to be something like the mean girls but it definitely wasn’t that which was a refreshing change. I did like the bond between the girls.

The relationship between Dylan and Rachel was sooo cute. I loved them together and their chemistry was obvious. He was such a caring guy and I loved that he conveyed his emotions through poetry. The last part of this book felt a little rushed, I would have loved to know more about how everything was finally executed. Nonetheless, it was enjoyable.

Overall, Lost Girls was a good read. I enjoyed the plot and the mystery behind the characters added a definite layer over it. I loved the romance between Dylan and Rachel and the drama surrounding the overall book was definitely intriguing. The writing was smooth and easy to read and it was fast-paced, I easily finished this book in a setting.

So guys, what do you think about this book? Right up to your alley or would you like to give it a chance? Share your thoughts with me!