Review: The Red Rising Saga by Pierce Brown || Where the rising started off slow but ended with a bang! 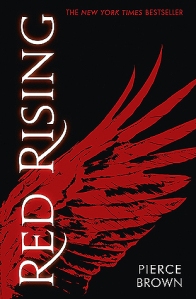 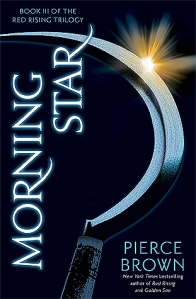 The Earth is dying. Darrow is a Red, a miner in the interior of Mars. His mission is to extract enough precious elements to one day tame the surface of the planet and allow humans to live on it. The Reds are humanity’s last hope.

Or so it appears, until the day Darrow discovers it’s all a lie. That Mars has been habitable – and inhabited – for generations, by a class of people calling themselves the Golds. A class of people who look down on Darrow and his fellows as slave labour, to be exploited and worked to death without a second thought.

Until the day that Darrow, with the help of a mysterious group of rebels, disguises himself as a Gold and infiltrates their command school, intent on taking down his oppressors from the inside. But the command school is a battlefield – and Darrow isn’t the only student with an agenda.

Break the chains. Live for more.

‘I’m still playing games. This is just the deadliest yet.’

Darrow is a rebel forged by tragedy. For years he and his fellow Reds worked the mines, toiling to make the surface of Mars inhabitable. They were, they believed, mankind’s last hope. Until Darrow discovered that it was all a lie, and that the Red were nothing more than unwitting slaves to an elitist ruling class, the Golds, who had been living on Mars in luxury for generations.

In RED RISING, Darrow infiltrated Gold society, to fight in secret for a better future for his people. Now fully embedded amongst the Gold ruling class, Darrow continues his dangerous work to bring them down from within. It’s a journey that will take him further than he’s ever been before – but is Darrow truly willing to pay the price that rebellion demands?

Darrow would have lived in peace, but his enemies brought him war. The Gold overlords demanded his obedience, hanged his wife, and enslaved his people. But Darrow is determined to fight back. Risking everything to transform himself and breach Gold society, Darrow has battled to survive the cutthroat rivalries that breed Society’s mightiest warriors, climbed the ranks, and waited patiently to unleash the revolution that will tear the hierarchy apart from within.

Finally, the time has come.

But devotion to honor and hunger for vengeance run deep on both sides. Darrow and his comrades-in-arms face powerful enemies without scruple or mercy. Among them are some Darrow once considered friends. To win, Darrow will need to inspire those shackled in darkness to break their chains, unmake the world their cruel masters have built, and claim a destiny too long denied—and too glorious to surrender.

This series has been on my tbr list for a loooong time and it was finally time to tick them off the list. But honestly, I wasn’t that much impressed with Red Rising, I don’t think I would have continued if I already didn’t own the rest of the series. But I’m glad I did pick up because things finally looked up at me from the second half of Golden Son and since then I didn’t have to look back and I thoroughly enjoyed the series.

Darrow is a Red, he lives a world divided by colour and every day is a struggle for survival. He believes he and his mates are doing their best to create a better world for the future generation until he discovers all their efforts were based on a lie. And when the inevitable happens, helped by a rebel group under a nameless leader Ares, Darrow decides to take action by infiltrating the Golds, not by just doing anything but being among one of them. But as time passes Darrow discovers there’s so much more than war, he discovers so much more to life. Will he be finally able to achieve his long lost dream of a better world or will it perish with the uncountable wars?

As I said before Red Rising wasn’t a great read for me. Although things were refreshing and I definitely enjoyed the way things were handled in this book, still it somewhat didn’t feel new. Maybe that’s because I read too much dystopia… Anyway, but as I proceeded onto the next book, things started to look up. The politics were one of the most intriguing parts of this book, this is coming from a girl who loves to stay ten hands away from politics, so yep! In Red Rising, the making of their own houses survival games felt a lot like the Hunger Games but the actual story begins in the second book when Darrow takes command and the actual plan begins to unfold.

“I would have lived in peace. But my enemies brought me war.”

Golden Son begins to shape up the plot for what’s about to come in the next book and the author does a pretty good job at building the momentum. Aaaand, Morning Star was actually pretty awesome! It was pretty brutal and bloody too. Although Ragnar’s part felt a lot like the Unsullied in GoT but I did like his character. Some of my favourite characters died, some lived to see another day but the war was epic actually. I enjoyed the last book the most. It was full of action and suspense and I couldn’t put the book down. There were also some chilly and powerful scenes which made me shiver, and Darrow rightfully earned the name of the Reaper.

This book had a vaaaaast number of characters but it wasn’t confusing which was a plus. I definitely loved Darrow, our lead protagonist and his character growth throughout the series. When we were first introduced to him, only revenge was the one thing that kept him going but as days passed and he understood the whole scenario, he knew things were so much bigger than just a petty revenge. And I loved that he didn’t give up until the very end. There were moments, but he trudged on. Of course, that wouldn’t have been possible if he didn’t have such great friends to back him up which brings me to them.

“A man thinks he can fly, but he is afraid to jump. A poor friend pushes him from behind.” He looks up at me. “A good friend jumps with.”

Among everybody, I looooved Servo the most. That guy was a nutcase but an adorable goryhell nutcase. His irrevocable loyalty and belief in Servo made me love him even more. And even though the tension between him and Servo reached a notch in Morning Star, I was so glad when they solved it like adults because let’s face it Servo is awesome but he is not a great at being a leader. Not only Darrow but seeing all the characters grow throughout the series made me super happy!! Also, I loved Mustang, I never ever doubted her for a second. I loved the chemistry between Mustang and Servo and how their relationship slowly developed from allies to something much more.

One of the most interesting characters was the Jackel, Mustang’s stepbrother. That guy felt shady from the moment he was introduced and the web of lies he so neatly arranged was mind-boggling. The other villains were pretty interesting as well but I just wanted to beat the heck out of them with my ever-lasting frying pan!! They stooped so low and the Jackel didn’t even care about the consequences and *spoiler*I was glad to see him getting the deserved “reward” in the end.

And even after everything I somehow didn’t lose faith in Cassius, I knew he would eventually choose the best in the end. I just somehow had that gut feeling and I was overjoyed to see him and Darrow reunite at the end.*end of spoiler*

Another reason to love this series. It kept on surprising me out of bloody nowhere. This especially happened with the war strategies and stuff and it was pretty interesting and kept me guessing what was going to happen next. And there were so many freaking deaths.

The most shocking part was Ares’ identity, I seriously did not see that coming. I was woooooahh!! Hold it right there but oh well nobody listened because of the bloody war. *spoiler*Also, Ares’s death was like out of nowhere but it was Ragnar’s death which gutted me the most.*end of spoiler*

The Red Rising Saga was an interesting read and I’m glad I was able to enjoy this series till the very end although the beginning was not very strong. I fell in love with the characters and the plot was complex enough for me to keep reading on. I loved the character growth and the way everything was written made it a pretty smooth read. At first, I thought with Morning Star things would come to an end but as everybody knows by now, the fourth book, Iron Gold is coming out next year, although I still don’t know how I feel about that because the blurb is kinda heartbreaking but obviously realistic, I think I would be picking it up.

So guys, what are your thoughts on this series? Have you read it yet or is it in your tbr? Who’s your favourite character? Are you looking forward to the next book in this series?

18 thoughts on “Review: The Red Rising Saga by Pierce Brown || Where the rising started off slow but ended with a bang!”