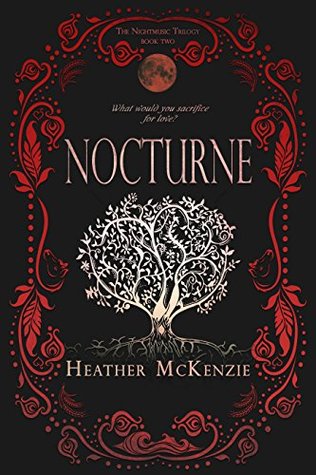 I am hunted.
A pawn in a vicious game.
The only way I can protect the ones I love…
…is to disappear.

Finally free of her father, Kaya has the one thing that keeps her heart beating—Luke.

Blissfully content in his arms, everything seems perfect…until their world is shattered by a deadly invasion. When an old ally comes to the rescue, Kaya wants none of it. She is devastated to learn the identity of her attacker, and that she must do something truly heartbreaking if she wants to save the ones she loves. Sacrificing everything and sinking into bottomless sorrow, Kaya finds solace in an unlikely friend—one who shows her a different kind of love and helps her discover an inner strength she never thought possible.

The first book in this trilogy, Serenade was a pretty awesome and engaging read. Compared to that, the 2nd book felt slightly bland and repetitive. But I have to say one thing, the covers of this trilogy are really unique and beautiful!

Kaya is still on the run from her father who is only after her fortune. After an incident, she truly understands that she poses a threat to anyone near her, so she decides to bail alone. But surrounded by enemies on all sides, will she be able to hide or will she be betrayed?

A lot of stuff happened in the first book, Kaya learned the truth about herself and why she was held captive by her father and why he is after her. She ends up getting kidnapped by Luke but along the way ends up falling for her captor. I felt this book was more of a kind of filler because other than the introduction of few new characters, this book only contained running and hiding and it was devoid of any interesting surprises. But seriously, Kaya definitely has the most shittest parents in the whole universe!

One of the things that surprised me was, I actually started liking Oliver. His actions disgusted me in book 1 but after knowing the real reason behind it, he slowly started warming up to me. But… but I felt Kaya’s character was a kind of irritating this book! And on top of that, Thomas. What even!! She miraculously gets rescued after bailing on Luke and ends on a farm where she manages to get a job there and ultimately one of the guys there fall for her. Why is that everybody end up falling in love with the main heroine? I would have rather enjoyed it more if it was a purely platonic relationship. It would definitely have been more meaningful.

On the other hand, one of the new characters Marlene was absolutely my favourite. Born with a hideous birthmark on her face, she mostly stays away from crowds but a beautiful bond develops between her and Kaya. I loved the fact that Kaya stood up for her on more than one occasion! But the most awesome thing about this book was the bromance between Luke and Oliver! I didn’t even guess that anything slightly normal was possible between these two because they were always at each other’s throats. This was definitely a delightful surprise.

Overall, Nocturn was an okay read. The plot felt a little repetitive and this book could have been a little less lengthy in my opinion. The action and stuff were there but I wanted more of it but nonetheless, I enjoyed those particular parts.But the way things ended, I am definitely interested to know what happens next to our characters!

So guys, what do you think about this book? Is it on your tbr?