Review: Seducing Kaden by Siobhan Davis || Where the Romance brew even without the Seduction 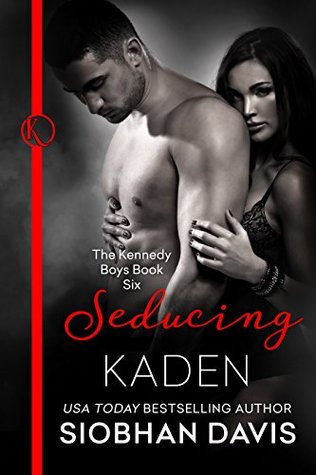 Kaden
The woman I love will never be mine because she already belongs to another.

I’ve tried everything to forget her, but it’s impossible when she occupies a starring role in my dreams. I’m obsessed, and my eyes are glued to her shapely curves whenever I see her around campus. It doesn’t help that she looks as miserable as I feel, and I wonder if she misses me as much as I miss her.

Short of putting a bullet through the skull of that gangster she’s married to, I’m stuck in a hellhole of my own making.

Until fate intervenes, setting us on a collision course we can’t avoid.

Evelina
When I was a little girl, I dreamed of falling in love. The all-consuming sweep-you-off-your-feet kind of love I swooned over in movies.

It didn’t take long for that fairytale notion to come crashing down around me. Now I’m trapped in a marriage I despise with no discernible way out.

The only light in the dark is Kaden Kennedy—the one true love of my life. He doesn’t know he is, because I’m forced to love him from afar, condemned to toss and turn at night, crying over everything I want and all I can never have.

Seeing him day in, day out, destroys me, but there’s no other choice; I had to push him away to keep him safe.

Because if my husband ever finds out I’m in love with one of my students, I won’t be the only one in danger.

While you don’t need to read the earlier books in this series to enjoy Seducing Kaden, it is highly recommended. This book is a contemporary new adult romance, and it is only suitable for readers aged eighteen and older due to mature content, sexual situations, and language.

[A student-teacher forbidden romance from USA Today bestseller Siobhan Davis. Standalone with an HEA and no cliffhanger. This story includes details of an extramarital affair, so if you don’t like cheating or controversial storylines, then this book isn’t for you.]

This booooook!! I was so eager to read Kaden’s story and forbidden romance is most top most favourite tropes. Though this book is not a light one and it deals with some important issues, I enjoyed it from the first till the last bit.

Kaden and Evaline have a chance encounter before Kaden discovers that she is her new professor in college. The attraction between them is instant but neither can give their feelings a chance because of their condition until both of them can’t resist anymore. Eva dropped her chance at happiness because of her husband who is aligned with illegal business and is a sadist but meeting Kaden for the second time brings back all the beautiful memories they had once shared together and this time Kaden doesn’t want to give up either.

Seducing Kaden was a second chance romance book which tells the story of Kaden and Evalina. The plot flashes back to the past and the present where it defines the start of their relationship and the present situation. Although the plot was predictable, the storyline flowed smoothly and the romance kept me engaged throughout the whole book. The attraction between Kaden and Eva is instant and both of them can’t deny the obvious attraction between them. One of the things that I loved about both of them was the mutual respect they had for each other. I felt really bad Eva’s situation, she was forced to live in a hell with no way out but after meeting Kaden, she began to hope for the first time in his life.

Although cheating is an element in this book, anyone would feel relief about this fact after knowing Eva’s bound condition. God, she had to go through so freaking much. Her husband was one hell of a onster whose clutches she couldn’t escape at any cost and even if she tried her loved ones would have to pay the consequences. It was actually quite difficult for me to read some of the parts. Anyway, Kaden treated Eva like a perfect gentleman, he was thoughtful and caring and did his best to protect her. The plot could have been a little more dynamic but it was still enjoyable.

Overall, Seducing Kaden was an engaging read. I think I would have enjoyed it more if there were some surprising elements, but the ending left me satisfied. The writing was smooth and the pace was even throughout the whole book. It was a pretty quick read in fact which was an added bonus. I also loved the fact that how this book paved its way for the next Kennedy book! I am definitely excited to read that!

So guys, what do you think about this book? Have you read any previous book in this series or any other book by this author?

One thought on “Review: Seducing Kaden by Siobhan Davis || Where the Romance brew even without the Seduction”