Review: Cinder & Ella and Happily Ever After by Kelly Oram // My personal favourite contemporary retelling of Cinderella! 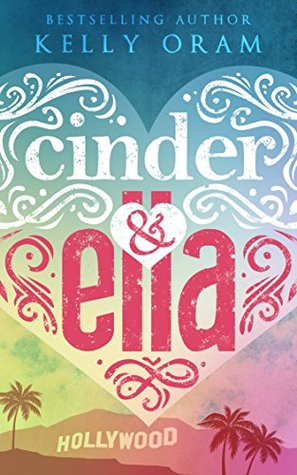 It’s been almost a year since eighteen-year-old Ella Rodriguez was in a car accident that left her crippled, scarred, and without a mother. After a very difficult recovery, she’s been uprooted across the country and forced into the custody of a father that abandoned her when she was a young child. If Ella wants to escape her father’s home and her awful new stepfamily, she must convince her doctors that she’s capable, both physically and emotionally, of living on her own. The problem is, she’s not ready yet. The only way she can think of to start healing is by reconnecting with the one person left in the world who’s ever meant anything to her—her anonymous Internet best friend, Cinder.
…
Hollywood sensation Brian Oliver has a reputation for being trouble. There’s major buzz around his performance in his upcoming film The Druid Prince, but his management team says he won’t make the transition from teen heartthrob to serious A-list actor unless he can prove he’s left his wild days behind and become a mature adult. In order to douse the flames on Brian’s bad-boy reputation, his management stages a fake engagement for him to his co-star Kaylee. Brian isn’t thrilled with the arrangement—or his fake fiancée—but decides he’ll suffer through it if it means he’ll get an Oscar nomination. Then a surprise email from an old Internet friend changes everything.

The end of one story is often the beginning of another. Hollywood heartthrob Brian Oliver and his Cinderella princess Ellamara Rodriguez have finally found love outside the digital world. But leaving their anonymity behind creates a whole new set of obstacles for the nation’s new favorite sweethearts. With the stress of Brian’s fame, Ella’s disapproving family, and the pressures of a new relationship weighing down on them, the It Couple quickly begins to wonder if they can hold on to their newfound joy, or if maybe happily ever after is only a fairy tale.

I read Cinder & Ella for the first time in 2016 but never got the chance to write a review despite utterly falling in love with it. Lo, behold! Kelly announced its sequel in 2017 but well I finally got to it this year. I also had a sudden craving to reread the first book, therefore I didn’t give up the chance to binge read it and holy hell, it was fun! When you reread a book after a long time, there is a kind of excitement to go back into the familiar world. At the same time, you wonder if you are going to love it as much as you did before. Thankfully, my experience was quite good, I would say even better than the first! I won’t lie, this book set my standards so high, I wasn’t fully able to love Geekerella or similar books like that because I had already read this. This book was albeit cheeeeesy and fluffy but well it earned a special place in my heart. Well anyhooo, onto the review…

Cinder and Ella had virtually met through Ella’s blog where she posts hilarious books and movie reviews. Cinder a.k.a Brian is a teenage heartthrob who longs for something real. Despite reading “not so awesome” comments about his acting skills in her blog, they strike up an unusual friendship. They also share their love for the Druid Prince Chronicles where Brain is actually playing the role of Cinder. Although they have never met, they share a lot of bond and harbour mutual feelings. However, before anything begins, Ella faces a big accident where she almost becomes a cripple. Losing her mother and sending to live with her dad and her step-family is a cherry on top. The only shining light in the darkness is Brain with whom she gets to reconnects with after a year.

So… I fell in love with the story of Brian and Ella all over again. Ella’s pain and heartache all over made me ache for her again. Although Ella’s a pretty self-dependent person, her injury does not let feel that way. She is left nearly more than half burnt after the accident and hence is forced to live with her step-family. Mostly, the whole family starts up on the wrong foot which creates quite a few misunderstandings between the family members. But thing that I loved the most this duology is the relationship between the sisters. This relationship was particularly not rainbows and sunshine at first but I completely loved how it evolved as the series moved forward. However, the same cannot be said for the father. I mean… he tried to redeem himself but it just didn’t feel like he was trying 100%. I mean even if he did, he always said the wrong things at the wrong time and always questioned Ella instead of being just with her and supporting her.

On the other hand, Brian was a complete sweetheart. He was patient, supportive and loved Ella with his whole heart. However, while reading this for the second time, I basically realised he had no flaw. Neither did Ella. Not much. So yeah, although these characters were outstanding but sometimes they just felt a little too bland. Although I could resonate with Ella a lot since I react pretty much the same way she does in certain situations. Despite these flaws, I enjoyed their relationship right from the very start. Brain definitely had me swooooning! Oh, I also enjoyed the complexity of the situation since they have been online friends forever but in real life, only for a few weeks. I definitely enjoyed how the author handled this situation and it didn’t feel rushed at all.

I noticed one thing about the dad department in this book. Mostly, both of them were douches and didn’t live up to my expectations. Okay, although Ella’s father was a not a complete douche but he still was… I mean if you get what I mean. In the first book, we get a glimpse of the limelight that Brian is always in due to his career as an actor. This was especially highlighted in the sequel as well since we get to see its impact on Ella. Although there were vulnerable moments, I was so glad to see them fighting for each other along with sharing equal love and respect.

Overall, Cinder & Ella and Happily Ever After were both an awesome read. It was a great duology with a filled with romance, comedy as well as heartwrenching emotions. This book made me laugh out loud on various occasions and even made me cry my eyes out. However, I am so glad I picked up this series, although it was on a whim. All the characters were uniquely distinguishable and I adored each and everyone (mostly) of them. This rhythm of this book was pretty steady and it followed a slowly yet simple writing style. Due to these certain factors, I was able to enjoy this series far more!

So guys, have you duology this yet? Or any other book by this author?

2 thoughts on “Review: Cinder & Ella and Happily Ever After by Kelly Oram // My personal favourite contemporary retelling of Cinderella!”